The Toronto Smalltalk User Group has been active for 20 years. At our peak we had about 45 people attending meetings. Lately we've averaged about a dozen.

What can we do to get more people to attend?

I suspect we already know all Smalltalkers in the Greater Toronto Area, if not personally then by just one level of separation. Our best bet is to target new people that may have an interest. We've had some success with Ryerson students. The two professors that sponsor our group encourage the students that take their OO course to attend. It has some Smalltalk content (Pharo) and a couple of students have come out.

Some of the TSUG crowd have attended XP Toronto events. They have regular meetings, pair programming pub nights and they organize well run Agile conferences. Those that know about Smalltalk respect it because of XP's roots, but they tend to be surprised that it's still an active language.

Yanni Chiu has been something of  a TSUG ambassador, representing Smalltalk at things like the "Dynamic Languages Smack Down". He and Chris Cunnington signed up for Toronto Startup Weekend and plan to show some Seaside app. I had some tentative plans to talk to the Durham Ruby group (something I need to follow up on).

Whenever it's appropriate I hand out TSUG pamphlets. They list all the Smalltalk dialects, web frameworks and projects I know of. I print off a new batch for each TSUG meeting, with updated meeting schedules and conference information (ESUG in in the current one). It's an MS Publisher document which I print off on heavier stock paper which has a light blue tint. Here is what part of it looks like... 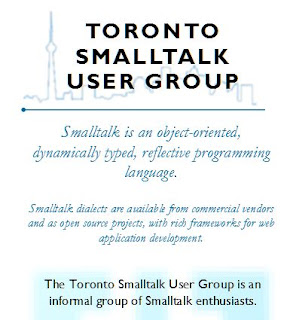 I'd love to get suggestions on how to promote the group.

Malcolm Gladwell in his book Outliers makes the point that people with very high IQs are not more likely to be successful than people with just 'good' IQs (120, evidently). Once you're smart enough, other factors like people skills and communication skills make the difference.  Smalltalk has an IQ above 180, the other tools are probably in the 120 range. Smalltalk needs to work on its people and communication skills.
Posted by Bob Nemec at 08:08