We use Google charts to show various issue metrics. As is typical of a Smalltalk developer, I built my own class to manage the API calls. When I first looked into Google charts (two years ago, I think) I could not find community sourced options and building my own proved educational. Props to those that do build general purpose Seaside components, it's not trivial. My stuff is narrowly focused, and even that took some work.
My latest update added 'age' colours to an issue backlog bar graph. Something that may look like this... 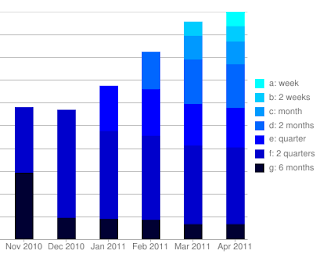 At least that was true back then.  Using the Chart Wizard shows that you can use... 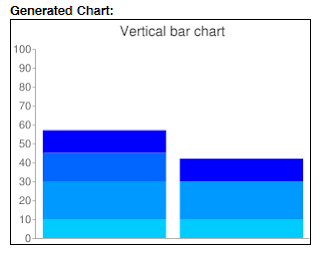 It's stuff like this that makes the general purpose Seaside graph components impressive.  My original charts used cht=bvo instead of cht=bvs. Maybe it was supported, but I didn't see it (Actually, I still use the cht=bvo in order to keep the legend order the same as the graph colours). It takes time to keep up on all this, while still doing your regular job.  Thanks to those that do.
Posted by Bob Nemec at 14:00

Email ThisBlogThis!Share to TwitterShare to FacebookShare to Pinterest
Labels: Smalltalk